Human Scum! Today is the day!  “The New Dark Ages” has finally been unleashed on the public.  The album is available digitally today! It will be released on CD on July 15th and vinyl and cassette on September 16th via the...
Read More
Concert, Concert Photos, Reviews

Strait from Moody Center Etches In Memories For The Soul

The King of Country Music George Strait headlined the night with special guests Willie Nelson & Family and Randy Rogers Band. With a price tag of $375 million. The Moody Center is a state-of-the-art facility with a capacity of 15k featuring club seating and several Austin area food vendors. The 530,000 sq ft arena was well thought out to provide an intimate experience for guests with its incredible acoustics and the quality of the images projected onto screens so viewers don’t miss a thing.

Opening the night was Randy Rogers Band. Set upon a diamond-shaped stage in the middle of the arena, Rogers and his band played a short 5 song set that set the mood and got the program headed in the right direction. Willie Nelson & Family followed with an hour-long set that spanned decades opening with Whiskey River. Celebrating his 89th birthday, Nelson sat in the middle of the stage with his trusty and instantly recognizable guitar Trigger while the band surrounded him to help provide the soundtrack for the evening. Only pausing briefly between songs, the hits just rolled one after another. After wrapping up Angel Flying Too Close to the Ground, Willie smiled and acknowledged the crowd with “I hear you” bringing thunderous applause and cheering from every seat in the house. There are songs that have been written that people connect to emotionally for their own reasons, You Were Always on My Mind is one of those. The feeling in the air was one of amazement and joy as memories rushed by.

Tears were shed. Lightening the mood, Willie blazed through crowd-pleaser Roll Me Up and Smoke Me When I Die. From there the band hit several more classics on the way to the finale including Georgia, Good Hearted Woman, and Hey Good Lookin ‘amongst others. To end the night Willie Nelson & Family played their version of It’s Hard to Be Humble a country music classic written by Mac Davis in 1980. It was a great end to the set as the lyrics meant to be satirical actually ring true to the country legend. Nelson left the stage as the band played him out to Tequila while Willie loaded into a golf cart to be driven off the arena floor. Instead of the popemobile, we got the Williemobile.

The anticipation built as time moved on between sets. Up next was King George himself! With the stage being in the middle of the floor there was only one way for the artist to enter the stage. The lights went down and the spotlight lit up the path as the band made its way out. As George Strait stepped into the light the building erupted. The country music legend is no stranger to these entrances as he graciously took it in and circled the stage smiling and waving on his way to his guitar.

On stage, there were microphones on each corner of the diamond-shaped platform that Strait would take turns singing at in order for the entire audience to experience some face time. Letting the guests know what to expect, the band opened with Here For a Good Time before rolling into classics Ocean Front Property, Check Yes or No followed by I Can Still Make Cheyenne. There was no absence of energy from the 69-year-old country star. His unmistakable baritone is still as strong as it was 40 years ago. Halfway through the set, a short commercial for Codigo played as the band started the song named after the tequila. The visuals that splashed across the monitors made it feel as if we were fully immersed in the commercial as well.

Taking a break from the music, Strait welcomed a Military Warriors representative along with a veteran to the stage and awarded him keys to a mortgage-free home! Getting back to business, the Ace in the Hole band kicked off The Fireman. Growing up this song was one of my dad’s favorites (retired firefighter) so naturally, this one really made me smile as they played it out before queuing into another Strait classic The Chair. Setting up for the next song King George mentioned that he never got the chance to Sing One With Willie as Nelson joined him onstage to run through the song with the same name. The two legends harmonized gloriously in unison as the music of Pancho and Lefty played behind them on their second song. It really was a special moment to have both musicians on stage together. At one point it appeared that Nelson’s emotions were overcoming him as he felt the moment in the air. When the song was over Strait led the crowd in singing Happy Birthday to Nelson as he walked off stage. I’m so grateful that I get to have that memory.

The familiar opening fiddle of Amarillo By Morning filled the arena as the night continued. Finishing the set strongly, the band played through Troubadour before closing with Unwound. As the band took their bows they left one by one. The knowing crowd cheered loudly and lit up the arena with lights from their phones. As expected, George Strait and his band came back out to play an encore starting with All My Exes Live In Texas before rolling into Take me to Texas. Paying tribute to Tom Petty, Strait then covered You Wreck Me bringing a different element to help conclude the evening.

Fittingly the last song of the night was The Cowboy Rides Away. The 31-song set was jammed-packed with hits that made you leave wanting more. George Strait definitely lived up to his title as the King of Country music and could have easily played for hours longer if time permitted. This was a great show that was the perfect grand opening for a venue that will certainly deliver more legendary memories in the future.

The KNOTVERSE Is Coming: Slipknot Partners With Sandbox 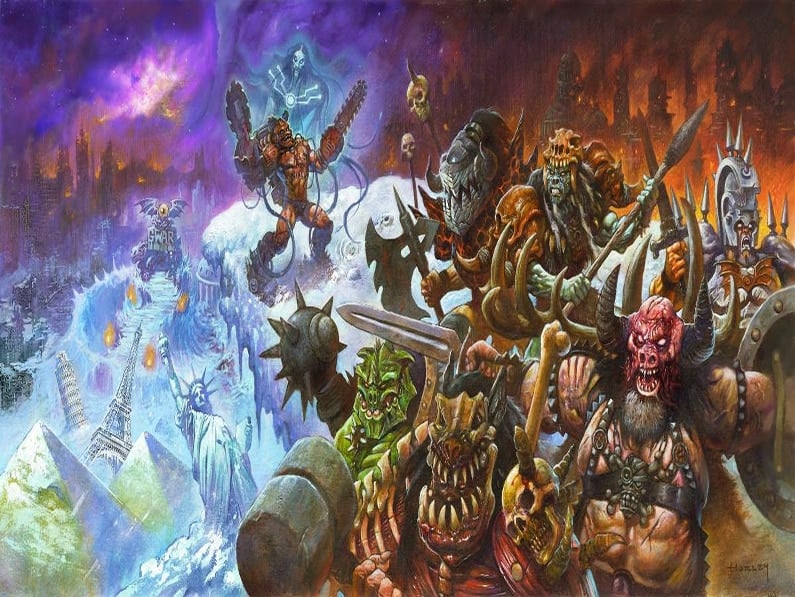